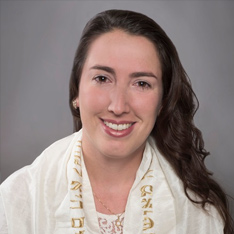 Bryce Emily Megdal was born and raised in Tucson, Arizona.  She attended a Jewish day school from first through eighth grade, where she developed a  lifelong passion for Judaism and the Hebrew language.  She began her singing journey in fourth grade, when she joined the Tucson Jewish Youth  Choir in its first year.

In high school, Bryce maintained  her Jewish identity by remaining involved at her temple and attending Hebrew High. Realizing that she wanted to be a leader in  the Jewish community, particularly involving Hebrew, music, and creativity, she double majored in Judaic Studies and Studio Art at the University of Arizona. A year later, she decided to pursue the Cantorate.

Bryce began her studies at AJRCA in September 2013. By May 2015, she had achieved a  Master’s Degree in Jewish Studies with an emphasis  in Music in Jewish Life. She would serve as the Cantorial Soloist for Hollywood Temple Beth El, and as the Cantorial Intern for both Temple Akiba and Valley Beth Shalom.  In addition, Bryce was one of the two main B’nai Mitzvah teachers for Kehillat Israel Reconstructionist Synagogue during all six years at AJRCA.

I would like to thank my parents, Ron and Sharon Megdal, for their unconditional love and for being my constant support and inspiration on my journey to become a cantor.I would also like to thank my fiance, Marc Tanne, my extended family and dear friends for their support and encouragement.To the AJRCA staff and my former classmates,many of whom I will now call colleagues, I am forever grateful for your guidance, support and companionship. To the numerous congregations in which I’ve served, thank you for helping me grow into the CantorI am today.

Upon ordination,  Cantor Megdal looks forward to serving in  a congregation while continuing to write Jewish music, a  deeply fulfilling passion of hers