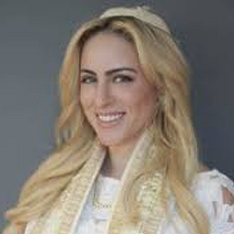 Stephanie Kupfer graduated from Pepperdine University  with  a BA in Music. She continued her education at the San Francisco Conservatory of Music, earning a Master’s  Degree in Voice.

Stephanie’s passion for music began at 6 years old when she joined her synagogue youth choir. She went on to use her formal training and won lead roles in several  musical theatre  and opera productions. After performing  in New York and Europe, she decided to combine her love of spirituality with her musical expertise and studied for one year with Cantor Sol Zim at AJR in New York.

While studying to obtain cantorial smicha, Stephanie has tutored  many bar and bat mitzvah students,  led services for various congregations  and sung in  both secular and religious  choirs.  She has also taught religious school, voice and Hebrew. Stephanie was the Cantorial Intern as well as the Cantorial Soloist at Temple  Isaiah  in  Los Angeles.  She has also served  at Valley  Outreach  Synagogue in Agoura  Hills, Temple Ahavat  Shalom in Northridge, Temple Ramat Zion in Northridge,  Temple Etz Chaim in Thousand  Oaks, Valley Beth Shalom in  Encino, and Temple Emanu-EI in Bayonne, New Jersey.

I wish to thank my many guides on the quest to becoming a cantor. First and foremost I am grateful to my three grandparents who survived the Holocaust and taught me tolerance and perseverance. I am indebted to my parents for their love and for always emphasizing honesty, integrity and hard work. I admire the Academy faculty and staff who work tirelessly  to make AJRCA successful.  I will forever appreciate the Academy for helping me achieve my dream of a life of giving, teaching and reaching others.

Upon ordination, Cantor Kupfer seeks to continue her role on the pulpit, combining both traditional  and modern melodies, enhancing the ritual experience  of all age groups. She sees her future with an expanded  role in teaching  Jewish  music and song.