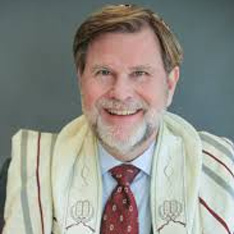 John  F. Guest  holds  a  Bachelor of Music in clarinet performance from the Oberlin Conservatory of Music, a Bachelor of Arts in philosophy from  Oberlin College, and a Juris Doctorate from Duke University. He practiced employment law with private law firms  in New York and Los Angeles  before becoming  an executive  in the legal department of a Fortune 500 corporation.

Inspired by his daughters’  b’not mitzvah and encouraged  by fellow congregants  and family, John left his legal career and began cantorial  studies in 2011.  John has led High Holy Days services at Temple Sholom of Ontario,  conducted  Shabbat and Festival services at Temple Isaiah of Palm Springs, Pasadena Jewish Temple, and other synagogues, and tutored  b’nai mitzvah students at Wilshire Boulevard Temple. While  on this journey,  he has been blessed to work with clergy and congregants whose support has enabled him to reach this moment.

Upon ordination, Cantor Guest plans to continue tutoring  b’nai mitzvah students at Wilshire  Boulevard Temple and being on-call to fill in for his cantorial colleagues at synagogues throughout the Los Angeles  area.